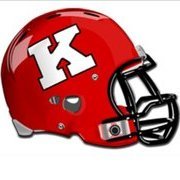 Lindale by 14+. I think both teams can make a run in the playoffs. Would be cool to see Lindale win Region 3 after dropping down. They have had a tough go for awhile in 5a. Glad to see them having suc

I'm taking the homer pick and going with the Bulldogs. Outside of the anomaly that was Kilgore/Chapel Hill and Lindale/Athens weekend, neither team has been in a close game. Kilgore D figures out how

I'm gonna predict a score of  Lindale 35 Kilgore 38 With Lindale having the final possession but time expires on their drive.