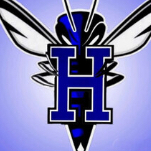 Yall got the best draw in the region! Thats what happens when you win district! Yall should be able to win this week and I think next week too. WR don't impress me.

Well Hooks hasn't made it out of round 2 in a long time so someone will break a trend!