Damiyne Durham, a 6-5, 195, guard from Oakwood High School has given a verbal commitment to play basketball at Baylor University.

Newton RB Kevin Shorter, 6'0 - 186 lbs, has verbally committed to the University of Texas. He held offers from some of the top programs in the country including Texas A&M, Arkansas, LSU, Oklahoma, Ohio State and Florida State.

He enters his senior season third in school history in both total rushing yards (2,960) and rushing touchdowns (43).

Below is a list of ETx teams qualified for the 2013 Texas State 7 on 7 Tournament. This year the tournament will be held at Southwest Williamson County Park in Round Rock. Division II teams will start it off July 11-12 while Division I will take place July 12-13. This list will be updated as the 7 on 7 season gets in full swing.

Cannon is the third East Texas player from the Class of 2014 to commit to Baylor, joining Liberty-Eylau WR/S Davion Hall and Nacogdoches DE Greg Roberts, Jr.

A Message from our Friends at APEC 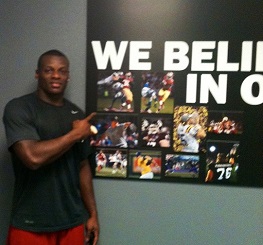 Kendall Hunter, San Francisco 49ers
My name is Bobby Stroupe and I serve as Training Director of APEC (Accelerate Performance Enhancement Center) in Tyler, TX. We are an athletic enhancement specialty facility that is designed to take your athletes to their next level of performance. We train athletes from beginners to professional including current NFL players such as Kendall Hunter(RB 49ers), Matthew Tucker (RB Eagles), Josh Aubrey (DB Browns), Jeremy Lane(Db Seahawks), David Snow(OL Bills), Marcus Jackson(WR Falcons) and Graham Harrell(QB Packers). We also have worked with dozens more that stop in over the offseason. Full List of Athletes In addition to NFL we train several MLB athletes in the offseason including perfect game pitcher Phil Humber(Astros), MLB record holder Josh Tomlin(Indians), and 1st round pick Tyrell Jenkins (Cardinals). In addition we have also been able to work with 13 High school All-Americans along with 12 College All- Americans in 5 different sports. Our trainers include some of the most highly educated and diverse backgrounds in our industry. Members of our staff have presented at medical seminars, coached and played college athletics as well as professional sports. Personally I have consulted with D1 and professional teams in multiple sports on training content and implementation.